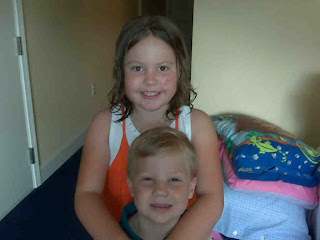 We had a bicycle accident last night: The ride-on attachment that our daughter was riding on became detached from my bike, and she tumbled to the ground. We'd not ridden far from the bike shop — a couple of circles around the block to get to Voodoo Doughnuts, and then we're heading north a few blocks when the accident occurred.

K. wasn't hurt badly, just some scrapes on her elbows, knee, cheek and lip, far fewer than I'd have expected — good landing instincts, evidently. But she was shaken up enough to scrap our plan of bicycling around Portland last night and this morning.

I should have pushed harder to get her onto a tandem bike, but then again, the attached bike shouldn't have detached — we couldn't even find the pin that was supposed to be attaching it as we walked the accident scene — so who knows …

Of course, we did hit Voodoo, the original, "scary" one downtown. And I must say, despite all the build up from friends and tv segments we'd seen in the past month ("Man v. Food," "No Reservations"), they are darn good donuts. Not at all like the over-hyped-but-not-very-good-unless-they-are-hot Krispy Kreme, but like any good local donut shoppe you've ever been to. K. chose the jelly-filled, two-armed Voodoo doll doughnut itself, P. the bubble gum topped raised doughnut (of course!), and Cynthia a crisped rice and peanut butter drizzled delight. I opted for an old-fashioned (thanks to a Mike Berner conversation about donuts a week ago) and the Portland Cream, mostly so I could compare them to all the pastries I've loved before … Heavenly!

So is it the hype, the anticipation, or the do(ugh)nuts themselves? Probably a combination of all three. But sitting all together in our Hotwire.com discovered hotel room noshing on donuts and sipping nonfat milk, it was a family moment that we each enjoyed deliciously.

We're walking to Powell's City of Books in a few minutes. As we drove past it last night, K. marveled at its size, which allayed my concerns about how long it would take her to re-engage with the discovery part of our long trip. She's going to be just fine.

More from my site