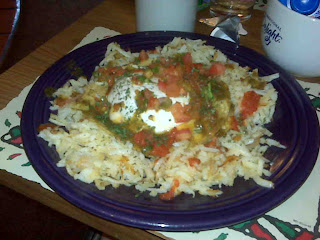 We’ve hit the road to Mt. Rushmore, saying hello to US-20 once again (we last drove US-20 in Oregon) and are stopping at another “Roadfood” local for a hearty breakfast, Lisa’s. Their menu ranges from the country Farmers Breakfast to Indian fry bread and huevos rancheros — a tri-level stack of tortillas, perfectly over-easy eggs, cheeses, beans, salsa and green chili, surrounded by hash browns … mmm! (Rob, you would LOVE this!)

And meanwhile, P., our 4-year-old, continues his recent trend of politely asking waitresses for water and “something for K. and me to color on.” He has been blossoming here on the road, both in vocabulary and expressing himself and in the positive ways that he and K. have been relying upon each other for play, imagination, and backseat food and movie sharing.

The road here has been deserted — we were the only car on it for miles. But here in Greybull we were greeting with choppers and other assorted cycles, this being a junction point for three US highways in northern Wyoming.

Last night in Cody, a thundershower rolled in, and we decided to forego the rodeo for a world premiere evening of “Princess Protection Program,” which K. has been tracking for several weeks. A good decision, as we had a nice room at the Big Bear Motel in town, the kids had bunkbeds, and Cynthia had down time to journal.

I pulled photos off of the digital camera, thinking I’d get a few posted here. I discovered we’d already taken 550 pics and vids, though that includes a hilarious sequence of photos that P. took from the back of the bicycle trailer in Portland of his shoes, Cynthia pedaling, more of Cynthia pedaling, more shoes, the bug screen, Cynthia’s purse, and so forth. When he saw them on the computer screen last night, he started laughing. (I was surprised at how he has picked up how to scroll forward and backward through the JPEGs in Windows. He will be photo editing soon, I’m sure.) We’ll paste a few of the other 500 up here in the next few days.

The fireworks warehouse was AWESOME … total kid in a candy store experience for both of us. Remember Roman Candles and all those now banned fireworks from our childhood? They had those, along with plenty of things you can shoot into the air! Any place that sells a dozen mini bottle rockets — literally, the ones you stick into a Pepsi bottle, light and launch — for under $1 must have only the best of Fourth of July intentions in mind. We’re looking forward to a full-blown shopping experience with my cousins in Oklahoma next week.

Speaking of which, we’re revising the itinerary a bit, dropping a night’s stay in Kansas City — we’ll have 24 hours of Royals and ribs — to get to Broken Arrow, Okla., a day earlier. More cousin time for the grownups and the kids … and, given the July 4 celebration, probably less grownup time for all!

More from my site